Hello everyone and welcome to another edition of Me Talking. Well, tomorrow is Christmas Eve. I’m pretty sure just about everyone is done with their Christmas shopping. I just finished yesterday. One thing that struck me as a surprise when I went to the store yesterday is that people around this time of year resort to some extreme mood changes. Personally I stay the same throughout any holiday, but yesterday I came across a couple of examples that showed what drastic feelings many may have towards the holiday. I was at a store finding some labels for gifts. You know, the ones that you put to differentiate which gifts belong to who. Well, the labels were the only items I was carrying as I made my way to the cash register. Now, this occurred 3 days before Christmas people. You could imagine the long line with people carrying gifts. Whole carts filled with toys, movies and canned hams alike. I thought I was going to be there for a while. Then, as if on cue, the people in front of me started to let me cut them. It really was a rather generous sight to see. The gesture of the people gave a bitter-sweet nausea that made me take a deep breath. I got to the front of the line and paid for my labels. I thanked the people behind me and left the store. When I got back into the car and started towards the mall I told the people who were in the car with me the generous deed the people did for me. We arrived at the mall. Now, I have to be honest. It was a while since I had stepped into a mall. Almost a year had passed and this mall was extremely packed in. We had trouble simply finding parking. Anyway, we’re looking for a parking space, when we see it. In the distance we see the oasis that was the lone parking space at the end of the lot. It was there, as if everyone had missed it somehow. We slowly made our way to the parking space when a small sedan nearly crashed into us. Our car stopped so hard my sister who was in the car with me would have hit her head if it had not been for the seat belt. When I looked up I saw that same Sedan in the parking spot we had picked out from afar. The driver of the Sedan got out of his car and actually said something to US. I believe it was among the lines of “watch where you’re going”. Originally I was quite angry. I mean, some guy cut my family off, but then I realized why the man was so angry. The poor D-bag must have been stressed out with all his shopping. We still left a note on his car, but it would have been much worse if I had not given the poor bastard mercy. So, be thankful, Sedan driver guy who wears pink North Face. Be. Thankful. 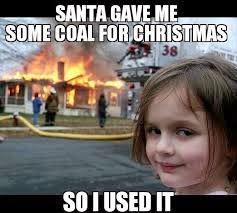 NOTE: I HOPE YOU GUYS ENJOY YOUR HOLIDAY, WHATEVER IT MAY BE.
Posted by DolfTheGod at 2:14 PM